Have you ever wondered, what is the scariest thing?

Whether you are a fearful person or not, is there something everyone is scared of? And if so, would that make it the scariest thing? To answer this, we have to consider why we get scared and what it means to be scared.

Why do we get scared?

Over millions of years of evolution, our brains have developed innate aversions. These things that we avoid such as pain and illness threaten our survival. Our ancestors that were 'scared' of these things survived, and the ones who weren't scared, didn't, meaning that these traits have been passed on through natural selection. The amygdala is responsible for fear, this is simply where our brain connects and remembers emotions but also assigns responses too them. Fear is our amygdala's response to expecting something bad or experiencing something bad.

When we experience something that is related to our innate aversions, this creates a fear. For instance, most people are terrified of COVID 19 because of our innate aversion of sickness. This is also why many horror movies explore sickness through parasites, global pandemics and apocalypses. But not everyone is scared of sickness. Innate fears are not feared by everyone, this may be from experience and training of the mind. Everyday people complete dangerous tasks and activities that most are fearful of, one example would be people who participate in martial arts and fighting sports, these people are not as scared of the pain and physical damage as a normal person would be.

Isolation is also an innate fear, being isolated increases our chance of things like heart failure and our ancestors needed each other to survive. This means isolation is connected to death according to our amygdala. Of course feeling embarrassed, or feeling left out has no effects to your health, but the reason that our brain triggers these responses, to seemingly harmful situations, is all due to our innate aversion of isolation.

Fear of the dark is very common, and there is a number of reasons for this. One reason is that predators and dangerous animals would come out at night, this has caused us to be wary of the dark. Other reasons may be due to the lack of vision and the fear of unknown. Losing senses (such as sight) is used by horror movies to terrify us, the scenes may be in the dark or a character may be death and cannot hear the monsters around them.

All innate fears link back to one thing: death. But death can't be the scariest thing. Many people put their lives before others in dangerous jobs such as being in the armed forces or being a firefighter. And lot's of old people express their feeling of being 'ready to die'. Some may have trained their minds to trust their ability to survive (like the example of martial arts) while others may sadly see death as an escape from pain.

Can fears be taught?

Now that we have covered fears that are programmed into us, can we be taught fears?

Fear conditioning is the process of being presented with some sort of stimuli that your brain then associates with your innate fears. For example, if someone gave you an electric shock every time it rained, you would become terrified of the rain due to the pain that comes with that event.

Phobias are also known as 'irrational fears'. This is due to your brain triggering your fear response to something that isn't to be feared at all. Spiders and insects are an example, these tiny and mostly harmless organisms can strike pure terror in even the bravest people. These can be handed down by our parents, if we see our parents scream at spiders, then as young children we may have come to associate spiders with danger.

Some people gather phobias from past experience. This may happen when an unlikely, but terrifying, event occurs and our amygdala responds whenever presented with that environment or situation. If someone went on an elevator and it broke down and they were trapped in it for ages, they may never want to enter an elevator again.

Is everyone scared of something?

The answer isn't as simple as it seems. If you have a healthy amygdala the answer would be yes, but if you have a damaged amygdala or don't have one at all, that begins to complicate things.

Normal brains will always trigger a response to stimuli that our brain perceives to be dangerous. This is necessary for us to survive, and is one of the many reasons that humans have become so advanced. But if you don't have a functioning amygdala, your brain can't connect experiences and threats together. You effectively can't feel fear.

These are the brains of Patient SM, AM and BG and their missing amygdala. 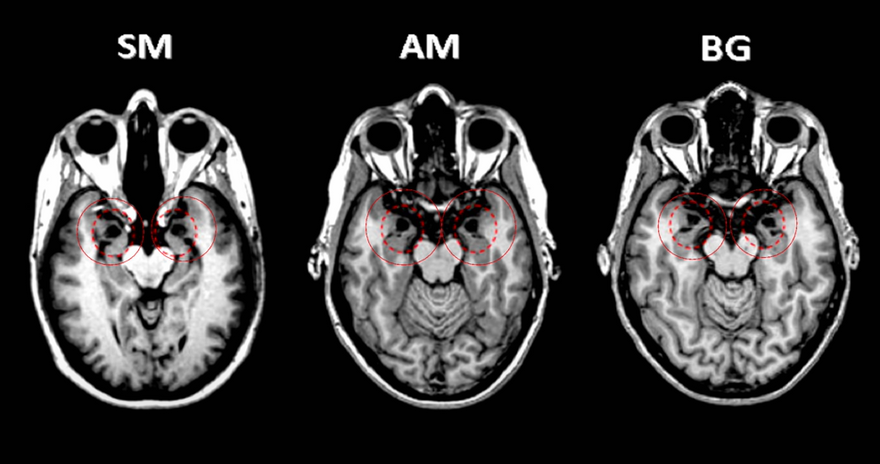 Patient SM is an American women who doesn't have a functioning amygdala due to Urbach–Wiethe disease. Her name is concealed from the public because of the dangers of not feeling fear. Here you can see some examples of how this affects her life.

S.M. is a white woman,<span class="mw-reflink-text">[13]</span> born in 1965.<span class="mw-reflink-text">[14]</span> In her personal life, S.M. has been the victim of numerous acts of crime and traumatic and life-threatening encounters. She has been held up at both knifepoint and gunpoint, was almost killed in a domestic violence incident, and has received explicit death threats on multiple occasions. Despite the life-threatening nature of many of these situations, S.M. did not exhibit any signs of desperation, urgency, or other behavioral responses that would normally be associated with such incidents. The disproportionate number of traumatic events in S.M.'s life has been attributed to a combination of her living in a dangerous area filled with poverty, crime, and drugs, and to a marked impairment on her part of detecting looming threats in her environment and learning to steer clear of potentially dangerous situations. S.M. herself has never been convicted of a crime.<span…

Many tests have been done on patient SM and others to see if they have a response to horror movies and other things that people would consider to be petrifying and they found that she never displayed any symptoms of fear such as goose bumps and a heartrate increase.

However, she agreed to participate in an experiment where she inhaled carbon dioxide. They expected her to not register the danger at all, but they were wrong. For the first time, Patient SM felt fear and panic attacks. They repeated the experiment on other patients who responded in the same way.

Experiments with S.M. revealed no fear in response to exposure and handling of snakes and spiders (including tarantulas), a walk through a haunted attraction (Waverly Hills Sanatorium, specifically), or fear-inducing film clips (e.g., The Blair Witch Project, The Shining, and The Silence of the Lambs), instead only interest, curiosity, and excitement, though she also expressed emotions appropriate to the film content such as happiness and disgust when viewing non-fear-inducing film clips.<span class="mw-reflink-text">[3]</span> Research has revealed that S.M. is not immune to all fear, however; along with other patients with bilateral amygdala damage, she was found to experience fear and panic attacks of greater intensity than the neurologically healthy controls in response to simulation of the subjective experience of suffocation via carbon dioxide inhalation, feelings which she and the others described as completely novel to them.<span class="mw-reflink-text">[4]</span>

S.M. is described as very outgoing, extremely friendly, and…

Fear was induced in their brains due to the midbrain and brain stem which are believed to have carbon dioxide sensory neurones, which meant that the amygdala was not necessary to cause fright.

So is suffocation the scariest thing?

It has been shown that having an amygdala may actually cause you to be less fearful of suffocation in a safe environment. For Patient SM, her amygdala could not tell the brain that she is in a safe environment, whereas for normal people, we may be aware that we are safe if studies are being done on us.

This means to truly terrify everyone, you need suffocation with an external threat controlling it. So overall, we are all scared of something, not exactly the happiest ending!

Thank you for reading and I hope you found this as interesting as I did. If you ever want to make a horror movie you know what to do now!

Olly Nelson
Huge fan of racquet sports and fascinated in chemical engineering.
I'll read this later...
#mentalhealth #wellbeing #procrastination
How we all 'Morally License'
#wellbeing #mentalhealth #mindfulness #morality
What is the difference between singles and doubles in tennis?
#tennis #wellbeing #flowstate #questions

Once suspended, olly will not be able to comment or publish posts until their suspension is removed.

Once unsuspended, olly will be able to comment and publish posts again.

Once unpublished, all posts by olly will become hidden and only accessible to themselves.

If olly is not suspended, they can still re-publish their posts from their dashboard.

Once unpublished, this post will become invisible to the public and only accessible to Olly Nelson.

Thanks for keeping Finding Flowstate safe. Here is what you can do to flag olly:

Unflagging olly will restore default visibility to their posts.